Posted by Ben Shukrallah On January 31, 2012 0 Comment
Some of the methods I used to create “Weapon XI: Deadpool”
This is a technical write up. 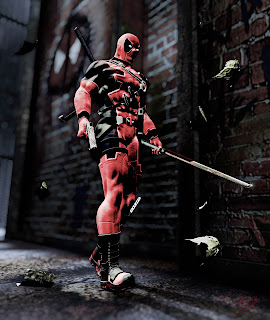 As appeared in CGSociety‘s 3D Stills Gallery
CGHUB Gallery
Every image requires references. I knew I wanted to modify the style of the character right from the start, while keep true to the original. I had a lot of freedom as there are several different cannon depictions of Deadpool.
After the initial research I modeled a basic base mesh in Blender3D. This base mesh held the basic form of the model and the proper topology I needed.

Simple base mesh resembling the form of the character and topology.
After that I export the model as an OBJ file and import it into Zbrush where I begin to block in the basic mass of the character. Next up is fine detailing and texturing with polypaint. I’ll usually use Zbrush Spotlight to add some kind of photographic texture to some materials to create a more realistic texture. I then export the model with a higher poly count and the Normal, Diffuse, and Displacement textures at 4098X4098 resolution .BMP files.

Fully textured model with diffuse/normal/displacement maps
The belts and accessories were modeled separately in Blender and  then textured/sculpted in Zbrush. For the belts I used and array modifier and attached it to a cube to fold and bend across Deadpool’s body. It required a lot of tweaking to match it up right. I modified a few of Deadpool’s original belt designs to give him a slightly different look. The swords are inspired by Metal Gear Solid’s vibroblades.

In the Blender viewport, with displacement on

Deadpool with accessories (minus swords)
The next step is getting Deadpool ready for animation. It required a fairly normal armature system. Everything on Deadpool was able to be animated.

Deadpool with one layer of “bones”

For the final image I decided to go with a back alley. I went through many different version. The final ended up being a study on depth of field and dynamic lighting. Here is some of the progression.

First phase of the back alley composition

A much later phase

Without depth of field effect

With depth of field effect
(it helps greatly)
And the final, with lots of extra work:

Thanks for reading everyone. Leave feedback or questions.
Oh, and just for fun, a render in the new Cycles Render engine, included in the newer versions of Blender!