Posted by Ben Shukrallah On April 29, 2013 0 Comment
Characters don’t come out of nowhere!
Creating a digital character in CG is an involving task. It takes a lot of planning and hard work. A good character is well thought out, and has an interesting appearance that speaks personality. You can should be able to tell some character traits about a character by looking at it.
So how does this happen?
The first step is planning. Traits can be written down describing the characters, such as good, evil, noble, strong, weak, etc. The more in depth the character’s personality is planned out the better.
Next it’s time to visualize the character. It’s time to sketch out ideas. The character’s traits effect things like posture, or the size of the character. Several ideas can be sketched out, mixed and matched while bad ones get tossed away.

Above and below we see sketches of Solid Snake from Metal Gear Solid 2 by character artist Yoji Shinkawa. 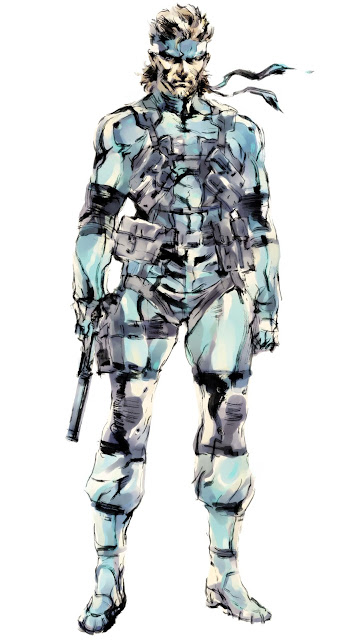 The next part of the process is setting the character up for animation. This is usually handled by an animation team. They will build a rig (controls that move the character) for the specific character. In Blender3D, for example, a rig is made up of armatures. Each armature will control one part of the body. Think of a rig as a skeleton, and an armature as a bone.

Zora Rig (2012 Ben Shukrallah)
The image above is a view port render of an image I made in 2012 featuring a Zora from Nintendo‘s Legend of Zelda series. You can see the Zora’s rig inside it’s body. Each armature corresponds to a body part and controls it. They can get pretty advanced, assigning multiple armatures to the same areas for example, or using armatures to manipulate other armatures.

As you can see above, the Zora is posed because of the armatures. Another note is that armatures do not show up in real-time or pre-rendered graphics, they are tools that stay in the background and are never seen.
Some things to consider:
No character is perfect. Perfect is bad. Reality has flaws. A flawed character is more realistic and interesting.
Many people will mirror characters, so what is on one side appears on the other. This okay when initially making a character just to keep proportions correct, but for smaller details it is far better to add variation to different sides. This keeps things interesting. Nothing in nature is symmetrical.
One of the most important features of a character is their eyes. Make believable eyes and the character will look like it’s alive.