Posted by Ben Shukrallah On April 29, 2013 0 Comment
There are a lot of things that factor into the creation process of making an awesome new piece of artwork, a video, or whatever you are trying to make. To help explain this process I’m going to take you through the thought process behind my latest project (that is currently incomplete).And just a note: I hate showing incomplete work, because it’s subject to change, but it also helps me keep track of my progress. It also helps with my creation process, because I can sort of back track, see where I began, where I am now, and what issues I face, which will help me proceed into the future of this project.
Inspiration is really important. I pull inspiration from a variety of place, such as movies, images, books, music, things people say, places I go,  and sometimes ideas really just come out of nowhere. I try to visualize what I’m trying to make first, as it makes for smoother development.For example, my latest project which I haven’t really shown much of to anyone at the moment is a kind of mixture between Avatar, God of War, Dragon Age and various other fantasy elements. For my senior project in the Graphic Design program at Longwood University I decided to make a tutorial series (which is being made now) that would walk an intermediate level artist through creating a fantasy character. The idea of a fantasy character came to me because then the person learning could kind of detail it the way he or she wanted to, and not just copy my work in the name of “learning.” I kind of wanted the learning process to be free.So I had to design a character. I first decided I wanted it to look sort of human, because I already know some human anatomy, and making up something crazy different that still looks good and proportional isn’t always easy. I decided to go with something alien, with human features. In fact, it’s only mildly different than a human.So I went to google images, and started looking at characters. Here’s some of what I decided to reference in the creation process. 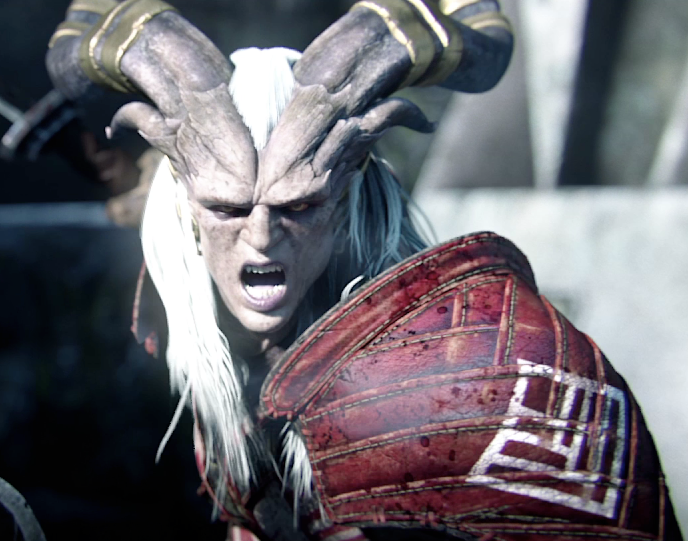 I haven’t played this, nor do I plan to, but I think this character just looks cool! So I download this picture and put it in a folder. I really like the fact this character has a lot of human features in the face, but he’s just a bit different. Also, this character really features a strong face, which is something I’ve always wanted in one of my characters, so this is something I will use to reference facial anatomy. I also like the color scheme, pale white skin, red clothes.

Since I’m going with an alien that’s “almost” human theme, avatar is a great thing to turn to. I directly referenced this female’s face from the movie when modelling the character for my latest project.

So here I’ll show an early shot of my model. Keep in mind, this a really early stage of development.

Of course, this doesn’t look like much, but it’s at an early stage. It really needs some detail. So I looked at characters like Marvel Comic’s Wolverine, as a reference for muscle anatomy. Specifically, I looked at a 3D sculpt of the character by an artist who goes by the name of slor.  I like the level of detail in the muscles that this artist achieved, and would like a similar effect. I also looked at an anatomy book by Scott Spencer, which I always keep by my side when doing work like this called Zbrush Digital Sculpting Human Anatomy. This book has been a GREAT help to me in sculpting anatomy. So now I’m going to show where I’m at now:

So as you can see, elements of a lot of different things are presented here. It’s crazy how I have built up from the initial images shown above, which weren’t much of anything, to this. And there’s a lot more work to do. I still need to make some awesome clothing and some weaponry for this guy!

Of course, there is more to think about when you’re designing  a piece. This stuff is kind of worthless if no one can see it. If you are trying to get your name out there you may want to consider creating something that’s actually going to get searched online. I doubt anyone will be searching for this character I’m working on at the moment, but it suites my needs for my tutorial series. If you are really trying to get your name out there however, you may want to consider making a project involving current events, like fan art for a new movie, for example.

I created an image of Marvel Comic’s Venom, and it gets seen constantly by people, just because they are searching for Venom.